And so many times, I really wish.

I wish my mom would talk to me.

I wish I could call my mom and tell her about my day...the funny things that happened to me, the encounters I've had.

I wish I was still married...it may not have been perfect, but it was my marriage.

I wish I didn't have to worry all the time.

I wish I was going back to school like everyone else.

These things are what goes through my head every day.

I miss having someone to talk to.

I miss having someone to hang out with...I'm not an introvert...I crave interaction.

Yet...sometimes I really want to be alone.

I miss having things to do.

I miss having a job.

I miss having that responsibility.

But, there are also some good...no great things in my life.

I have my Denny's family.

I have some really close friends from there.

I have a place to live.

I have people that care about me.

Sometimes, I miss my mom so much, that I do cry.  I do wish I could go back in time...but mostly I wish I could get her away from the people that are doing this, because she would never act like she is without these people in her life.  And the really crappy part of this is...I was helping them out because I knew they needed the money at the time.  I know Karma comes around, and my conscience is clear, but it still hurts.

This past year has been one giant hole...in the holes of the past five years...

There has to be an end to all of this heartache.  Sooner or later, things have got to get better.

Things have been improving, and yet, there's still those moments where I get lost...just for the tiniest moment.  I look and realize how much I've lost and how much I've gained.

One is never happy with their current situation...they're always longing for something more.

It's good to always dream...to always hope.  Because without hope, we are nothing.

Is History doomed to repeat itself?

I am angry.
I am upset.
And most of all, I'm appalled that there is so many mindless actions taking place that I just can't believe this.
Do you not realize, that even though we have bad parts of our HISTORY, it is still there?
Renaming military bases won't change the fact that they were once named after Confederate officers.
It's like people are wanting to erase our history, our culture.
And if you erase it, then how can you learn from it?
Yes, our history has always been turbulent.
Our history is, however, ours.
And, in my opinion we do learn from it.
We move forward.
We remember.
If you erase the Confederacy, if you erase everything about the Civil war, what's to make you think it won't happen again?  If it's erased from our history, then how do we learn from it?  How do we avoid repeating those mistakes?
We have a culture.  We are a nation.  We ALL (in the beginning) were escaping persecution!!!
Think about it...why the heck did the first settlers choose to brave a trip across the ocean???
Was it because it was a pleasure cruise?
No...it was because they were escaping persecution.
They were wanting religious freedom.
Are we going to erase that also because they don't have the same religion as we do?
Are we going to erase it because they fought with the Indians?
Are we going to erase all of our history because it is offensive to some people?
If that is the case, then we should erase everything and just call everything by numbers!!!
Hey, Military Base 1,  Military Base 2...heck why don't we get rid of our names and just resort to numbers also??? Seriously???
Hey, I'm number so and so, how are you?
Everything is offensive to someone, somewhere.
But, people...we have to draw the line somewhere.
Confederate generals had military bases named after them, not because they were generals, but because they did something that stood out.  Maybe they won a battle that no one thought they would win.  Maybe they were military geniuses.
Also, think about this...
When we fought in the Vietnam war, do you really think half of those soldiers that were fighting for the VC were there because they wanted to be there?  No, they were fighting for their country.  We were the invadors...not them. Not to mention, some of them did it out of family duty...they probably didn't believe in the war either.
Any war we ever fought in is because our LEADERS choose the war.  Not the soldiers, not the generals, not the officers.  They were following orders!!  To erase them from our history, to take away the recognition for what they did is blasphemy!!!
If we erase anything offensive from our history, then we would be fake!
We're trying to say we're better than everyone else because we're not recognizing this person for their genius in this incredible fight that they won, even if it was for the enemy.
Recognize the ACTIONS.  It doesn't matter if you hate the person.  It doesn't matter if you hate the reason...what matters is their ACTIONS!!!
I feel sorry for everyone that is so closed minded that they jump on this bandwagon of renaming everything.  Erasing our history.
I'm going to continue to teach my son THIS history...because I want him to know the truth...not a pretty painted falsehood that our government wanted because they want to get reelected.
If this was really something that was important to them, it would have been on their agenda LONG BEFORE any of this happened.
People, stop and take a deep breath.  Relax...our history will still be there, even if you erase it.
It happened, and no matter how much you try to erase it, it still happened.
Learn from it, don't erase it.
Posted by Marci at 6/17/2020 12:33:00 PM No comments:

Sitting at Denny's most of the day I see a lot of things.
I see families having meals out.
I see people doing business.
I see dates.
I see fights.
I also see the compassion that a complete stranger will show for another person.
We have servers here that are on a very tight budget, and yet...
They will take out of their tips to buy a meal for a homeless person.
They often feel bad for some customers...
They're often running ragged also trying to get everything done and make sure that your food is the way you want it.
Their feet hurt at the end of the night.
They usually have a headache because of stress.
They are worried about home situations.
They are planning birthday parties for their kids.
And yet, these are some of the most caring and compassionate people there are.
I've watched them over the past year.
I've seen their smiles, their birthdays, their heartbreaks.
I've seen them get utterly upset about a customer cussing at them...
and then handle it with uttmost professionalism.
I've seen them not get tips from a table, even though the service was excellent.
I've seen them handle the "regulars" (of which I am one of).
They remember most of their customers.
They remember the details about their customers (no mushrooms).
These guys are very hard working.
And as businesses slowly open up, they're getting busy again.
Give them a break...hours were cut, staff was cut, and they're probably running ragged because there isn't enough labor for the demand.  After all, some days it's totally dead, and some days, we're at capacity.
The next time you go to any restaurant, I challenge you to watch your servers.
Watch the ones in the back if you can...they're the hidden helpers.
Then, remember how they're running around, and that they only earn a fraction of what you earn per hour.
They deserve way more than I could ever give, but then again, I'm still getting back on my feet.
And, they have more heart than you will ever know.
They are a family. 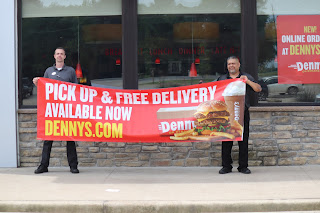 Email ThisBlogThis!Share to TwitterShare to FacebookShare to Pinterest
Labels: Denny's

For the past couple of years, I've posted mainly out of responsibility.
A responsibility to not neglect my blog.
A responsibility to say I still have a blog.
A responsibility to you, my readers, who have followed my life for the past however many years.
It felt like a chore, like something I had to do...not wanted to do.
Now...
I feel like paying attention to my blog again.
I want to write more.
I want to post more.
I want to share more.
But of what?
The fact that I spent the past year homeless?
My daily struggles?
Loneliness?
Fighting for some sense of normalcy?
I've lost so much these past five years.
Five seems like a nice round number, huh?
Anyway...I"ve managed to hold on to my blog, but that's about all I've held onto.
I've lost a couple places to live.
I've lost family.
I've lost everything I owned.
And still, I perservere.
Still, I wake up every day with a smile on my face.
I say "Good Morning" to the couple of my friends that are close enough for me to message them at 6am.
So, what do I write about now?
What do I say?
How do I start over?
See, here...I'm starting to get into a routine.
I sit all day at Denny's...mainly for the internet, but also because they're like family.
They are family!
It's hard to believe that the people that work at a restaurant were there for me when I needed...
Someone
or
Something.
I didn't know I needed it, and I wasn't looking for it.  But it found me.
And...while I may have my bad days, it has been good for me.
I was joking with one of the night managers yesterday after there was a bad experience with a customer cussing at one of the servers.
The customer said "the customer is always right", and I mentioned, that I'm a customer...
They VERY POINTEDLY told me that I am not a customer, that I'm Marci...
(I don't know if that's a good thing or a bad thing!!!)
So, I"m slowly coming back.
To my blog, to my life, to being me.
Hopefully, we can look for more posts from me.
Hopefully, I will be more active here, and my other social media platforms.
And...maybe...just maybe...I will do a couple of videos in the future...I'm still camera shy though!
Posted by Marci at 6/01/2020 03:47:00 PM No comments: