Last night was my first report card night EVER.
I know with three kids and one graduating this year that is a funny situation, but remember BooBoo has been with his dad and we won't mention Em.

Sooo, how did my Monster Boy do?
VERY WELL!!!
His wasn't the normal report card that you get, instead it was a paper of his goals and what they're working on this year at school. 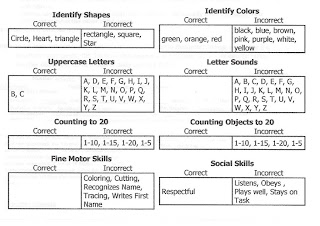 He knows more than this shows and his teacher even said that she has seen him identify all the shapes and colors!  HOWEVER,  he didn't do it when asked LOL (Yes, my kid is stubborn)
He also can count to at least 15, but for some reason he doesn't like #4 so she couldn't say that he knew it...all in all I think he's doing very well!

And then we have his IEP...

They added the second goal because he's not good at sharing...part of the problem of being an only child.  He's still not sharing, but he is doing good at listening to the teacher.

He goes to speech therapy twice a week and both the teach and I have noticed that he is trying to talk more.  He can repeat what we're saying, but there's a lot of sounds that are still stuck!  He's up to saying 2 words at a time now!!! WooHoooooo!!!

I'm glad that this is the only problem we deal with because of him being a preemie.  I'm so proud of my Monster Boy.

BTW...for those that say I'm mean for calling him Monster, look at my LAST NAME! He's gonna get called Cookie Monster sooner or later...I made it a good thing and it keeps his real name off the internet.
Posted by Marci at 10/19/2012 01:52:00 PM